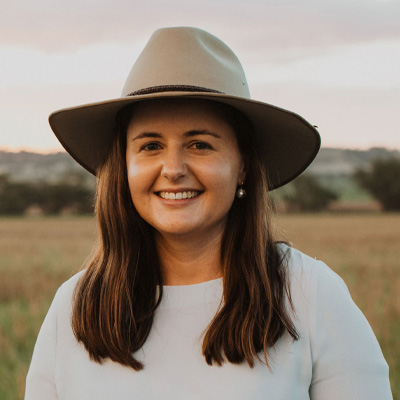 Dione Howard’s journey began on her family’s Illawarra merino stud in the Riverina and has continued as she has honed her expertise to include animal production, welfare communication and animal biosecurity. As a district veterinarian for NSW Local Land Services in Wagga Wagga, Dione sees her role as one of many health professionals who work alongside farmers. She has a love of communicating powerful stories which has seen her host a number of Leadership is Language interviews.

“Young Farming Champions play an important role in the future of agriculture as voices of our industries,” says Dione.

“I want to ensure our stories continue to be shared and I am also looking forward to giving back to an organisation that has done so much to help me – both personally and professionally.”

Dione was a 2015-16 Young Farming Champion and is currently chair of the Youth Voices Leadership Team. She is a graduate of the Australian Institute of Company Directors Course and was named the Royal Agricultural Society of NSW Rural Achiever Representative for 2020-21. Dione has developed skills in event coordination and has diverse committee experience including a current role in the Australian Veterinary Association Sheep Camelid & Goat Veterinarians Group.

To learn more about Dione, connect with her on LinkedIn.